City put on a show. When the class of 1969 took to the road, they turned heads with their fearless, technically adept football and their bold and brilliant new away strip. Conceived by the legendary Malcolm Allison, vertical stripes of red and black proved triumphant at the 1969 FA Cup Final, and the 1970 League Cup and European Cup Winners Cup finals, earning their place among all-time fan favorites. The 2022/23 Manchester City F.C. Away kit breathes new energy into a classic design. For the first time, red and black stripes flow down the jersey at an angle, inspired by the club crest and representation of the three Manchester rivers. dryCELL: Performance technology designed to wick moisture from the body and keep you free of sweat during exerciseProduct DetailsRegular fitSet-in sleeve construction with raglan back seamFlat knit v-neckEmbroidered PUMA Cat Logo on the chest and sleevesOfficial team crest on the chestPersonalisationName & Number – Customise your jersey with the name and number of your favourite Man City Soccer Jerseys player or even your own name. We can print name in the same style worn by the players. 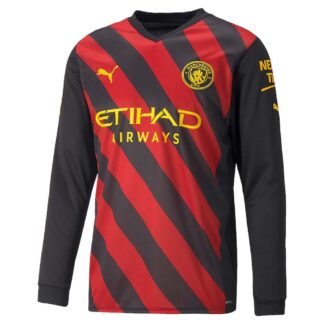