From 1967 to 1971, no team could match the style and swagger of Manchester City F.C. Their pass-and-move, end-to-end attacking football was simply ahead of its time. So, when they went on to win every domestic title and top it off with the European Cup Winners Cup, they did so in a way that, half a century on, inspires the new generation of Cityzens as they continue to push boundaries at home and in Europe. This season, Manchester City F.C. and PUMA honor the team of swashbuckling entertainers and their leader: club icon Colin Bell. The 2022/23 Manchester City F.C. Home kit echoes the classic designs of their era, placing the club crest at the center and burgundy trims on the sleeve cuffs. The crown logo inside the neckline pays tribute to Colin the King. dryCELL: Performance technology designed to wick moisture from the body and keep you free of sweat during exerciseRecycled Content: Made with at least 20% recycled material as a step toward a better futurePersonalisationName & Number – Customise your jersey with the name and number of your favourite Man City Soccer Jerseys player or even your own name. We can print name in the same style worn by the players. 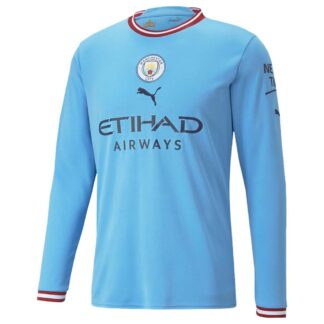